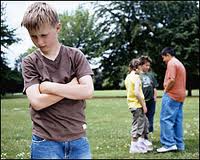 Objective: Bullying has become a major national concern, particularly as it affects children with disabilities. The current study aimed to determine the association between psychiatric comorbid conditions, involvement in bullying (victim, bully, or bully–victim), and the immediate psychological correlates of bullying among children with autism spectrum disorders (ASDs).

Methods: A national sample of 1221 parents completed a survey dedicated to the bullying and school experiences of their child with ASD, reporting on the immediate consequences of bullying involvement, including their child’s psychological well-being and any psychiatric comorbidity. Multivariate logistic regressions were performed to determine whether specific psychiatric comorbidities were associated with an increased risk of involvement as victim, bully, or bully–victim. Analyses of variance determined the relationship between bullying frequency and psychological functioning. All models adjusted for child and school covariates.